The business of securities settlement ought to look like a club night with Pete Tong. Just as the DJ and electronic music pioneer stands before a crowd effortlessly manipulating gigabytes of music from a single iPad, the back offices of the world’s financial institutions are supposed to allow traders to switch in and out of trillions of dollars worth of assets without skipping a beat.

In reality, their performance looks more like Rick Wakeman, the keyboardist from the 1970s prog rock band Yes, who would frantically wave his wizard-robed arms as he yanked cables out of a dozen incompatible boxes.

Harmonising the ledgers of the world’s banks requires scarcely less skill and energy. Records of trades have to be compiled and entered into those systems from the phone calls, emails and post-lunch handshakes that constitute the original bargains. Reconciling those trades and ensuring that all parties have the same records is a painstaking business. Electronic trade confirmations help, especially for standardised products, but in many markets paper tickets are still the norm.

Not all failures are as spectacular as those which culminated with Kweku Adoboli of UBS being found with up to $2bn of losses on unconfirmed deal tickets in his desk drawer. But mistakes slip through the net all the time, and cost money when they do. In the US Treasury market alone, about $50bn of trades “fail” every business day, incurring a charge equivalent to 3 per cent interest a year on the delinquent balances. Including private sector markets, the total volume of fails is likely to be in the hundreds of billions.

In the world of stadium rock, the problem of standardisation was solved long ago. You do not see Radiohead’s Thom Yorke posing in front of a huge stack of electronics resembling a telephone exchange, because in 1983 the makers of synthesisers and keyboards agreed on a common standard that lets you plug one into another without an impressive work of amateur electronics.

Financiers may not have noticed, but a technology has been invented that would solve their compatibility problem, too. Its name is bitcoin, although it could probably do with a new one; a whiff of sulphur still clings to cryptographiccurrencies because of their historical association with anarchists and the customers of the Silk Road online narcotics emporium. Richard Gendal of IBM has suggested that the underlying system should be called “shared ledger technology” instead.

So far as legitimate finance is concerned, the utility of this technology has little to do with its supposed ability to make transactions untraceable — a feature, if that is what it is, which can easily be switched off. It has everything to do with the “blockchain”, a public record of transactions that is updated whenever one person sends payment in bitcoins to another. Every bitcoin user can consult this shared ledger, and any copy is as good as another; there is no uniquely authoritative source. Clever encryption keeps the copies in sync, by making it easy to tell whether one of them has been doctored.

This is exactly what securities settlement needs: a way of recording every transaction once, sharing that record between the counterparties in exactly the same form, and updating in an agreed and standardised manner. It provides an easy way to set up the settlement systems for new or customised products.

It also automatically creates a full, agreed record of transactions, which would assist risk management and compliance functions hugely. And, with such a system in place, it should be straightforward to ensure that netting opportunities are never missed; if one trader sells units in an exchange traded fund and a colleague buys units in the same fund, their institution need not transact with any external parties.

There is the potential for cost savings that go well beyond eliminating mistakes. Back office employees earn salaries into six figures for reconciling settlements and confirming trades by hand. (One of the shameful secrets of financial services is how many people do jobs that could be made obsolete by a small computer program for pasting data from one window into another.)

The biggest obstacle to the adoption of “shared ledger”, of course, is one which has delayed much necessary investment in the past. It is unlikely that the banks will take on bitcoin in its current form, so they will have to agree on the design of a new standard. That means working together and trusting each other. Alas, those are habits that come less easily to bankers than to musicians.

BITCOIN PRICE ADVANCES TO ALTITUDE AT $260

A spectacular Bitcoin price surge has advanced to near $260 (Bitfinex) and 1638 CNY (BTC-China). The parabolic advance has left the market wondering about the next move and at the time of writing a bout of profit-taking has set in. The wave seems to be topping out in a familiar ending diagonal, whereby successive smaller waves punch to higher highs.

This surge higher had happened very quickly and may have gone “too far, too fast”. While we acknowledge the advancing scenario and give it credence, we should also anticipate a scenario whereby the entire wave from $230 to $258/$260 can be retraced. This outcome is illustrated in the following chart:

The 1-day chart shows us the current wave in the larger context.

The future should be viewed not as a fixed outcome that’s destined to happen and capable of being predicted, but as a range of possibilities and, hopefully on the basis of insight into their respective likelihoods, as a probability distribution. – Howard Marks

BitFury and the Georgian Co-Investment Fund partnered up to support Tbilisi, Georgia flood victims. According to the official reports, the severe flooding killed at least 12 people, swept away buildings and cars, damaged roads, caused deaths of hundreds of local Zoo animals. 24 people are still missing, dozens are left homeless.
The CEO of BitFury Group, Mr. Valery Vavilov said: “Our deepest condolences go to the families of those who suffered as a result of devastating flooding in Tbilisi, on June 13-14. On behalf of BitFury we would like to donate bitcoins to support the victims and also enable everyone willing to help from all over the world to make donations. In partnership with Georgian Co-Investment Fund we opened a joint bitcoin wallet where bitcoin donations are now accepted.”

The CEO of Georgian Co-Investment Fund, Mr. George Bachiashvili said: “In these moments of deep sorrow, our thoughts are with those affected by disastrous flooding in Tbilisi. Georgian Co-Investment Fund together with BitFury Group will raise money in bitcoins, giving an opportunity for the bitcoin community to support flood victims. We hope that our joint fundraising campaign will provide some disaster relief to the survivors.”

BITCOIN PRICE SURGES TO $250 IN A MAGNIFICENT PRICE ACTION

Bitcoin price has surged to $250 and 1600 CNY in what can only be described as magnificent price action. No other market instrument can do this and it is a unexpected reminder of the speculative potential in Bitcoin!

Price could achieve the red daily 200MA that has eluded it for months within the coming hours and then a pullback should be expected from $260 / $270. If the current surge was the wave top then we may see price retrace most of the spike to the upside. The depth of the correction will give clues to the next destination of price.

The most likely scenario, going forward, is that (following a pullback) price continues to the highs of earlier this year near $300 and $320.

Alternatively, this may be the first wave of a series of surges and deep pullbacks that successively work their way higher in the chart – toward $300. However, this behavior is not characteristic of Bitcoin’s chart movement, ‘though it would fit with the price patterns of this year so far.

Summary of Bitcoin as per Indian constitution

Definition of ‘currency’ and ‘prepaid payment instrument’ can be and has been in past changed overnight to include bitcoin. Currently bitcoin is to be treated as ‘computer program’ or ‘software imported online’ depending on where they were mined.

Overall conclusions :
Definition of ‘currency’ and ‘prepaid payment instrument’ can be and has been in past changed overnight to include bitcoin.
Currently bitcoin is to be treated as ‘computer program’ or ‘software imported online’ depending on where they were mined. 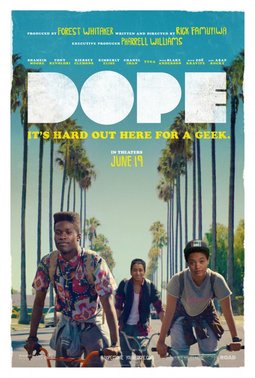 “Dope,” the Sundance Film Festival hit that will open in theaters this Friday, will be the first movie to accept digital currency to pay for tickets.

According to The Wrap, beginning Monday, the film’s distributor, Open Road Films, will allow Bitcoin users to buy tickets on MovieTickets.com at more than 900 theaters in the U.S.

The payment platform, GoCoin, will make the process transaction similar to a credit-card purchase.

The film, directed by Rick Famuyiwa, follows Malcolm (Shameik Moore), a geek living in Los Angeles’ Inglewood section who loves 90s hip-hop and has a large knowledge about modern technology.

Malcolm actually uses BitCoin in the movie when he and his friends are in a jam and even tells his mother early on in the film, “I just read that money as we know it is dead. Soon the world is only going to buy and sell products using Bitcoins.”

“Bitcoin is an integral part of ‘Dope’ and we could not be more excited to bring this unique new opportunity to moviegoers,” said Open Road Chief Marketing Officer Jason Cassidy in a statement.

Though you can do more with Bitcoin these day like use it to buy Microsoft apps and products, it’s still a service that’s on the fringe, as hacker Alex McGeorge points out in The Wrap story.

“I don’t know that I could convince my grandma to use Bitcoin,” he said. “It seems mostly like a young person’s game.”

And in an age where smaller movies like “Dope” (budgeted in the neighborhood of $1 million) have to compete against Goliaths like “Jurassic World,” that’s exactly who Open Road Films hopes will find this appealing.